The Badass Females of Films and Books

October 14, 2016 No Comments
Strength is defined as the quality or state of being physically strong. An underwhelming concept,
when you only skim the surface of its meaning. For me, strength is something that can reach a
mental, physical and emotional state. It can be one person, an entire nation or the entire world. It
can take you by surprise in your darkest moments- help you pull through with power you never
thought yourself capable of. But, it can disappear in the flash of a moment- as fleeting as an
autumn breeze. The individuals we see as “strong” can prove to be cowards, and those we deem
“weak” can tap into unimaginable courage. It is all a matter of perception and understanding of the
meaning of strength. And, as corny as it sounds, what we’re fighting for.
Strong, in both its purest and simplest form, female characters aren’t easy to come by. Be it in
films or books, some of the most well-known females roles have done irreversible damage to the
perception of women. Books and films often portray these strong females with a number of stereotypical roles and inescapable dependency. Such has a lasting effect on both the male and females population, even more so on our younger generations. Arts.Mic published an article “9 Harmful Stereotypes We Never Realized Our Favorite Disney Movies Taught Us.” This article gives readers a small taste of women being constantly forced into roles that affect how women are perceived and categorized in day-to-day life.
That’s right, that cute mermaid movie that taught us women should change their physical
appearance for a man at any cost, may have allowed females to believe that changing for someone was only a sign of love. Not to mention how that fanfiction, to book, to movie that took the world by storm with its ‘shady grey areas’ also taught readers that non-consensual BDSM was hot and may have normalized physically and mentally abusive relationships to its readers and viewers. These examples are only crumbs fallen from a large cake of inequality.
You could say that we’ve come a long way in today’s society- that females are put into parts with
more power and importance, but there is almost always a catch…
Almost…
Let’s take time to appreciate just a few of the films, television shows and books that did it right, and all the way right.
No short-cuts, no add-ins for romantic effect, no over-sexualization of the female body. Just pure
female badassery at its finest. Sarah Connor
(Terminator 2: Judgment Day)
Unlike most of the women you’ll see in this list, Sarah Connor isn’t your typical badass straight off the bat. From damsel in distress, to kicking ass and taking names, Linda Hamilton brings true form to the concept of ‘fear no evil.’ Not even when that evil is a terrifying mass of steal and robotic intelligence.As the main protagonist of a film filled with menacing male characters, Sarah Connor gives them all a run for their money. Rita Vrataski
(Edge Of Tomorrow)
Don’t be fooled by Tom Cruise’s insistent presence in this film, because its human solider, Rita Vrataski, played by Emily Blunt, who steals the show. As a renowned human solider during a war against the Alien race, Rita is the first solider to experience the horror of reliving the same day, over and over again. From the moment Rita makes her first on screen appearance, she’s putting her male counterparts to shame. Of course Rita doesn’t just kick ass. She even mentors co-character, Cage, whom despite being your stereotypical ‘strong man’ can’t seem to make it through a day alive, without Rita’s intervention.
Letty Ortiz 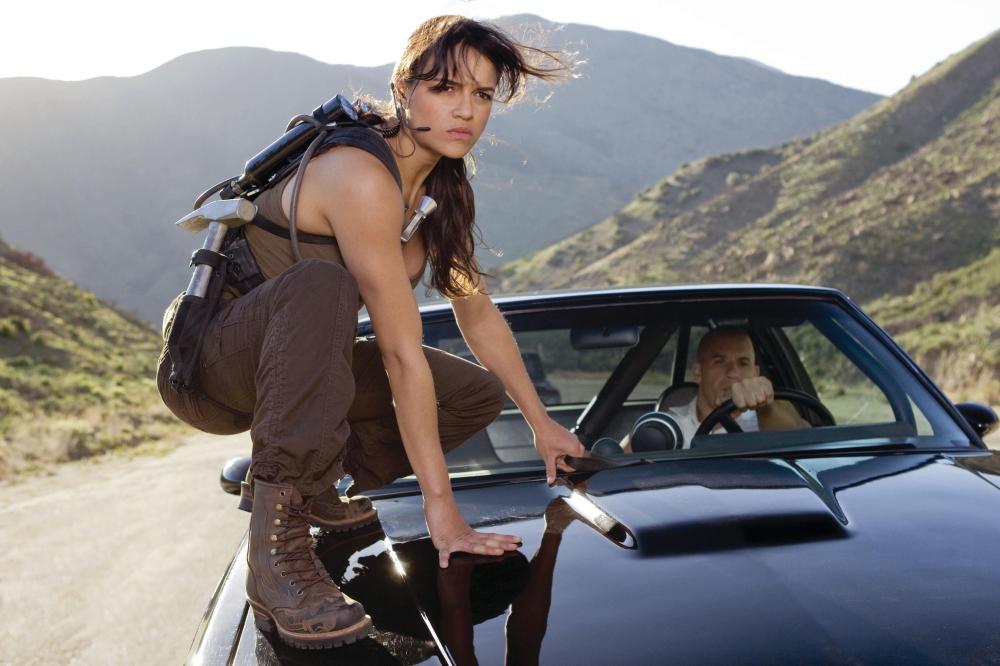 (Fast & Furious Franchise)
We all know the dangerous beauty that is, Michelle Rodriguez. Shes got a heart of gold, but don’t let that fool you. Michelle can cross her legs just as well as she can pack a punch. So when she signed on to play Letty Ortiz  in the Fast & Furious franchise, there was no denying the hurricane of self-confidence and ferocity that the audience had coming their way. After all, it takes a true badass like Rodriguez to play the on-screen equivalent. I think its safe to say that audiences weren’t disappointed. Lisbeth Salander
(The Girl With The Dragon Tattoo)
As a book, “The Girl With The Dragon Tattoo” is arguably one of the most difficult to read. There is no beating around the bush, no subtle subtext that sympathizes with its reader’s tender emotions. No, this book is as unforgiving as it is magnificent. One of the many reasons for its unbeatable delivery? Lisbeth Salander. In both the book and the film adaptions, Salander defies normal expectations of female beauty and brings the ‘take it or leave it’ attitude to the next level. This crime-investigating computer wiz doesn’t need a man to save her. She’s got her own back and enough generosity to save her male counterparts, too.
Hermione Granger
(Harry Potter franchise) 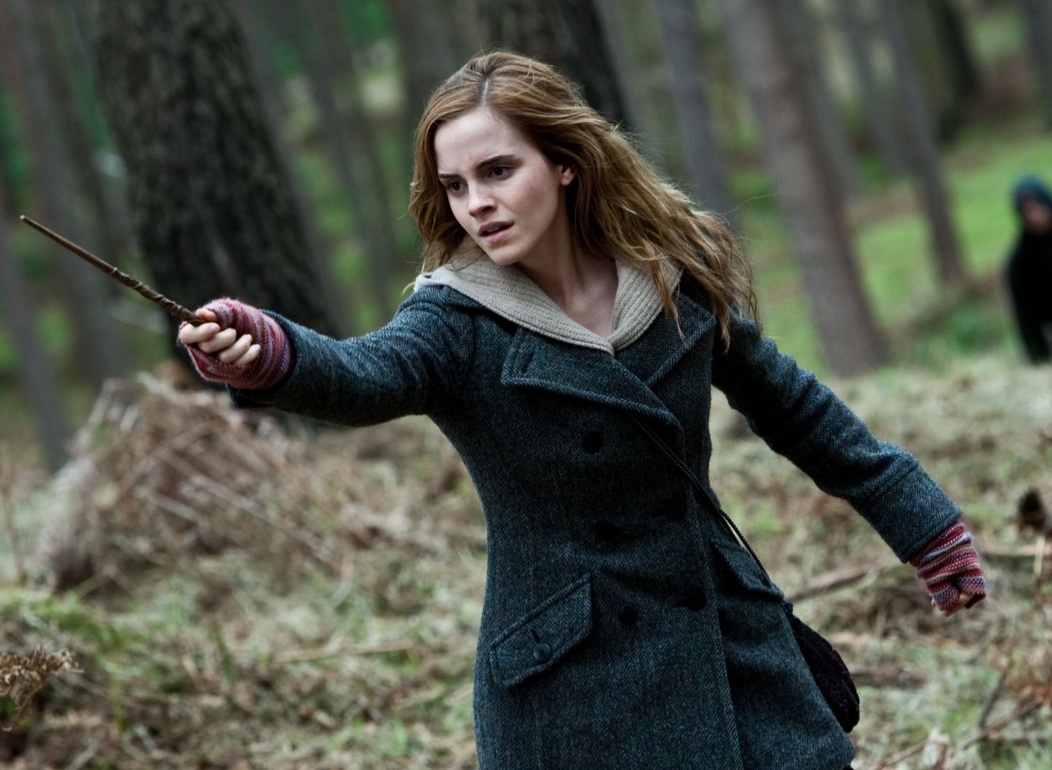 Harry Potter is a hero, I’ll give you that much, but he wouldn’t have gotten very far without his best friend, Hermione Granger, saving his skin at every turn. As the most mature and intelligent of the “Potter Trio”, Granger shows her unending capacity for bravery through determination and loyalty to both her friends and the fight against evil. As selfless as she was bright, there is no shortage of reasons why Hermione Granger makes the list of badass female characters. Don’t believe me? Just take a look at Bustle’s article on a few of the reasons we all should learn from Hermione Granger.
Katniss Everdeen
(The Hunger Games Trilogy) So you may be wondering why there isn’t a dazzling picture of the ever-lovely, Jennifer Lawrence, who plays Katniss Everdeen in the film adaptions of Suzanne Collin’s “The Hunger Games” trilogy. It’s simple, Katniss was her finest in the books. Don’t get me wrong, I sat in the theater and gushed over the flawless performance Lawrence gave and the way she brought life to Suzanne Collin’s beloved Girl on Fire. It was the changes they made to Katniss’s drive and personality that took away from her strengths. For one, the book version of Katniss Everdeen is interested in two things: staying alive and protecting her sister, Prim. Her love interests, Gale and Peeta, are little more background noise to the bigger picture . Shes willing to kill anyone and anything that poses a threat to her family and even uses Peeta’s romantic feelings for her, to save her own skin, with little regard (okay, no regard) for his feelings. She may not be nice, but you can’t say she isn’t a badass.

If only we could pay tribute to all of the badass females of film and literature. They date back centuries and they’re only growing in number with the passing of time. So, what badass female made your blood pump a little faster and your heart beat a little louder?