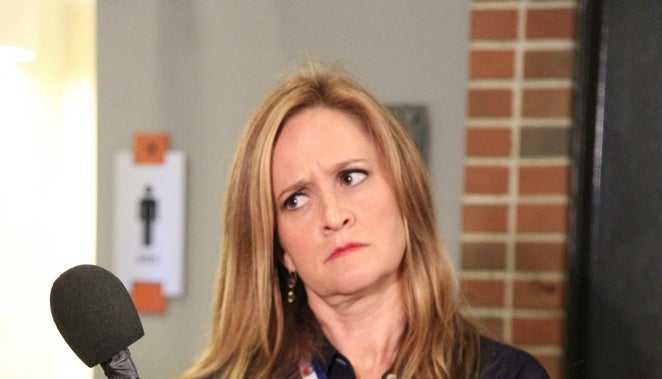 What do Conan, Colbert, Wilmore and Kimmel have in common? Two things: late night shows and being male. And while some (ahem Jessica Williams, Chelsea Handler, Kristen Schaal) have begun to penetrate the male-dominated area, the ‘genderization’ of comedy has been dually noted by comedian and long time correspondent on The Daily Show, Samantha Bee.  A photo of the late night comedian cast from Vanity Fair’s October issue was released yesterday. It quickly became a gender controversy when the lack of women became instantly obvious. Although not entirely all male and white as of recently (Thank you Larry Wilmore), it does without a doubt seem that diversity of all kinds is still a major absence.

However with Samantha’s new late night show Full Frontal with Samantha Bee airing this year, it seems like Bee will have the last sarcastic laugh on the matter.  Bee responded to Vanity Fair’s feature of the eight male comedians by posting her own photo onto Twitter. The picture portrays Bee as a centaur with red lasers as eyes, dominating the male scene.

But gender, or for that matter racial inequality, is by all means still present, even though a couple more white women have joined the late night comedy crew. However, today I am thankful for seeing these gaps closing with each small triumph and “first”. Although small, its changes like these that increasingly transform society. I’m thankful for the media for being a platform for social change when calling attention to inequalities is necessary. And of course, another thank you goes out to Samantha Bee, for making America laugh at our country’s preposterous antics and for always being, as she puts it, “female as f**k.”