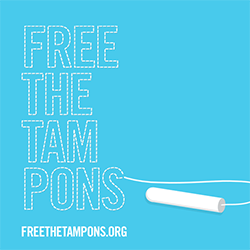 It’s that time of the month again. No, not payday, your period. If you’re a woman or have female organs, you know what I’m talking about. Each month, billions of women go through the natural process of menstruation by shedding their uterine walls. This is not the most pleasant thing to be talking about but considering nearly half the global population goes through this 100%  natural process, I would like to take a moment to talk about the various stigmas and issues with women’s menstruation. Women’s menstruation is very taboo in this male-dominated society so I’d like to bring some of these things to the light and into the pubic sphere and what some states are doing about it.

First off, feminine products like pads and tampons are not free for the public. Paper towels and toilet paper have been made accessible to the general public for a long time. This is a problem. Society has equated that the female body involves a lot more “extra things”. The fact that women’s healthcare is more expensive than a male’s says such. With this stigma, it has been viewed that women’s bodies are the extreme in society, and that a male body is the standard for which healthcare can be applied.

The women affected by this are not only the ones who don’t keep quarters on them for the product dispensers, or don’t carry around their own discretely in purses, but mostly lower income women. Personally, I see this first hand every day at the women’s shelter I volunteer at. Having the “time of the month” while not being well equipped for it can be the most humiliating times for these women. This also an important  health issue as well. An inability to provide healthcare and sanitary products can be correlated to certain diseases such as toxic shock syndrome and even cervical cancer. Luckily many shelters and organizations, like the one I volunteer at are able to give out hygiene kits that include a couple pads or tampons. However, this is still not enough.

No more #tampon smuggling. Tampons and pads should be freely accessible in every public bathroom. #freethetampons pic.twitter.com/9h4QPJTvgw

Luckily,  NYC is trying to change all this and I applaud them for doing so. Councilwoman Julissa Ferreras has begun drafting legislation and assessing finances in order to make these products free for every woman. During an interview, Ferreras made an extraordinary point when powerfully stating, “In a city where we hand out free condoms, we should be making tampons more affordable and accessible”. This is true. As a society that has conformed to a more “sex positive” ideal, something as natural as menstruation is still a forbidden discussion. In addition to making feminine products free for the general public, Ferreras is petitioning Albany in order to cut the sales tax of tampons and pads for in home use. Nancy Kramer from Columbus, Ohio knows this debate all too well. She’s the leader behind the “Free the Tampon” movement. She voices her opinion in her hilarious Tedx talk posted here.

While only a small part, this legislation could have hugely positive repercussions to society. A gender-equal society from the perspective of bodily functions can become recognized. We’ve liberated the condom, now let’s liberate the tampon.

Blackface or a Fashion Trend?